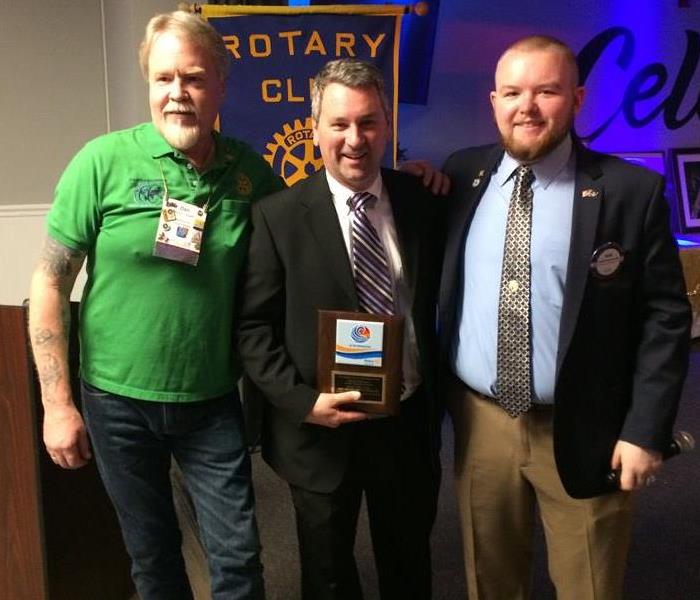 Last night SERVPRO of Woodbury/Deptford had the honor of attending the Deptford Rotary Club's "A Night of Live Jazz band and Sinatra Fundraiser".  It was held at Four Star Event Catering, in Wenonah, NJ.  There was a great time had by all that attended.  The big surprise came when our owner, Scott was awarded with a plaque for special recognition from the rotary for all that he does for them and the community.  Congratulations Scott, we know how good you are, we didn't need a plaque to prove it :) Thank you for all you do!  Good Food, Good Friends, GREAT time

Some days it's the little things that make you smile 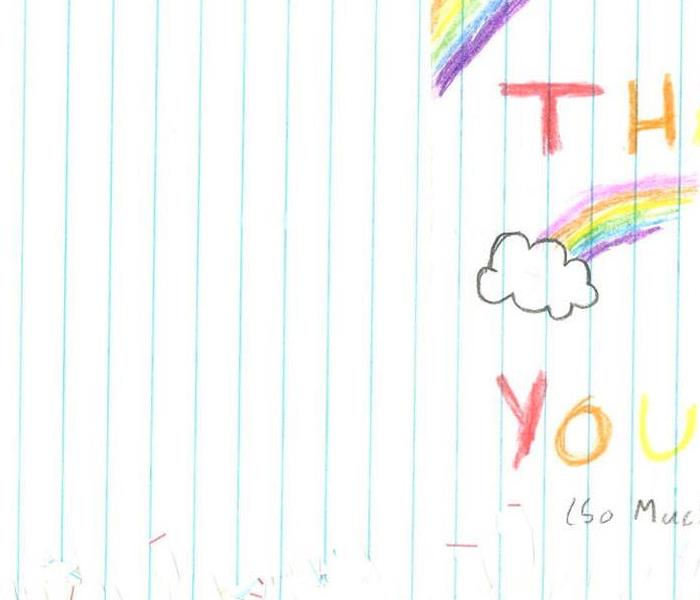 When our crews spend tireless hours on storm jobs wonder if being away from family and missing functions is really worth what they do, we get a little something that reminds us what we do is important to others.  We received a hand made note today, telling us "thank you so much for fixing my house.  I know it was so hot and I could not stand that.  I really appreciated your hard work you did."  From Taliana 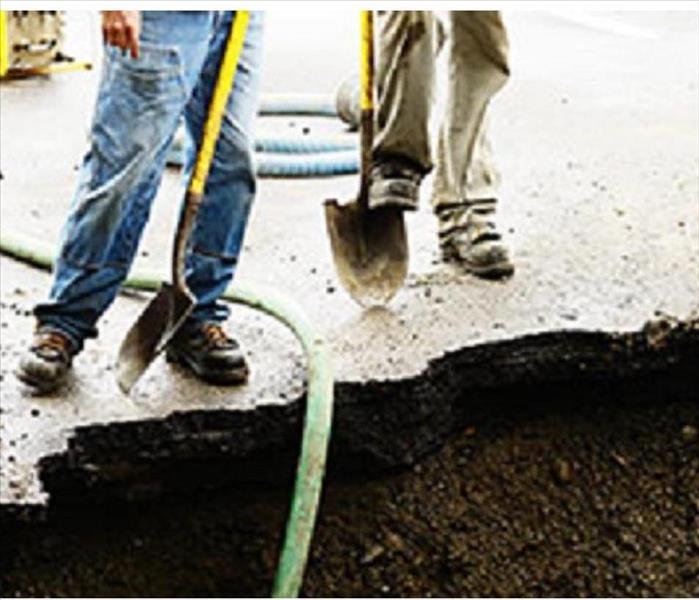 When disaster strikes your home, Property Insurance, is supposed to be there to help you pick up the pieces. Most of the time, it does.

A Bankrate survey found that 81 percent were aware flooding is not covered by regular homeowners insurance. You may have heard earthquakes also require special coverage. Yet you may not know that there are other types of damage that are excluded from most policies as well:

At least 1,000 species of mold are common to the United States, according to the New York-based trade group the Insurance Information Institute.

Despite the threat, a standard homeowners insurance policy generally either limits coverage for mold damage or outright excludes it.

Some insurers offer an endorsement to expand coverage limits for mold claims but only if you are willing to pay more for your insurance, she says.

The best cure for mold is to prevent it from growing in the first place. If the basement floods after a rainstorm or a pipe is leaking, eliminate the moisture promptly.

America’s sewer lines are rapidly aging, with some more than 100 years old. As more homes have been connected to these out-of-date lines, sewage backups have followed.

Other sources of backups include pipelines that handle both stormwater and raw sewage — and become overwhelmed in rainstorms — and blockages from tree roots that work their way into sewer-line cracks.

When a sewer backs up into a home, it can damage floors, walls, furniture and electrical systems. Standard homeowners insurance does not cover sewer backups.

The Insurance Information Institute says sewer-backup damage often can be covered for an additional premium of just $40 to $50 per year.

Sinkholes can seem like something out of a horror movie. For example, there was the Florida man who was swallowed up in early 2013 when a sinkhole opened without warning beneath his bedroom.

Sinkholes are sudden gaps in the earth’s surface that occur after groundwater gradually dissolves rock such as limestone and carries bits of it away, creating large pores and cracks in bedrock. Once large cavities form underground, the land above it may suddenly settle or collapse, creating the sinkhole.

In the United States, sinkholes tend to cause the most problems in Florida, Texas, Alabama, Missouri, Kentucky, Tennessee and Pennsylvania, according to the U.S. Geological Survey.

Most home insurance policies will not cover damage associated with “earth movement,” such as an earthquake or sinkhole.

Florida insurers must include insurance for “catastrophic ground cover collapse” — which refers to damage so severe, the home is uninhabitable — as part of standard homeowners insurance.

In every other state, earth movement is excluded from the insurance policy.

Colonies of anywhere from a few hundred to several million termites can quietly and methodically devastate your home.

Wood, paper and dead plant material that is in contact with soil near the house provides termites with a ready source of food and an entry. And moisture accumulated around foundations and in poorly ventilated crawl spaces gives termites a source of water they need to survive.

Over time, termites can damage or destroy support beams and other wood features in a house. The National Pest Management Association estimates that termites cause $5 billion in damage in the U.S. each year.

If these unwanted guests cause wear and tear to your home, do not expect your insurer to bail you out.

Homeowners policies do not pay for termite damage.

The Federal Emergency Management Agency, or FEMA, says nearly 3 million Americans live within 10 miles of an active nuclear power plant. If an accident at a nearby reactor leaves your home uninhabitable, standard homeowners insurance will not cover the claim. But that does not mean you will be unprotected.

A 1957 federal law called the Price-Anderson Act compensates people in the United States for any damage or injuries resulting from a commercial nuclear accident.

The law was called upon after the nation’s worst nuclear accident, at the Three Mile Island plant near Harrisburg, Pa., in 1979.

The insurance paid for the living expenses of families who decided to evacuate.

The Nuclear Regulatory Commission says an insurance pool of more than $12 billion is available to pay out claims.

Claims covered under Price-Anderson include:

In addition, individuals evacuated from an affected area can expect reimbursement for reasonable living expenses beyond what you ordinarily pay. The coverage does not pay your mortgage, does not pay for your normal food bills.

Some acts of terrorism

The recent Boston Marathon bombings were a reminder that terror can strike at any moment.

However, the policy does cover the homeowner for damage due to explosion, fire and smoke, these are the most likely types of damage a home would suffer in a terrorist incident.

If you own a condominium or co-op, the policy you carry on your individual unit will protect your structure and possessions from damage related to a terrorist attack.

However, damage to common areas — including the roof, basement, elevator, boiler and walkways — is not covered unless your board purchases separate terrorism coverage. 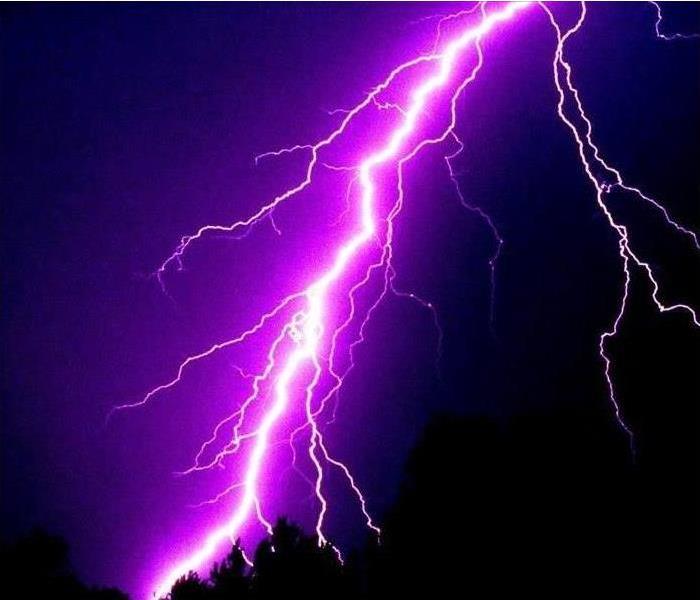 One of my favorite things about hot summer days is an afternoon thunderstorm to cool things down.  It starts with the darkening of the sky as cumulus clouds block out the sun.  Then the wind picks up and the air takes on the scent of wet grass.  Finally, the skies open up and drop their deluge of rain on the dry earth below.

Thunderstorms are most likely in the spring and summer months and during the afternoon and evening hours, but they can occur year-round and at all hours.  Many hazardous weather events are associated with thunderstorms. Under the right conditions, rainfall from thunderstorms causes flash flooding, killing more people each year than hurricanes, tornadoes or lightning. Lightning is responsible for many fires around the world each year, and causes fatalities. Hail up to the size of softballs damages cars and windows, and kills livestock caught out in the open. Strong (up to more than 120 mph) straight-line winds associated with thunderstorms knock down trees, power lines and mobile homes. Tornadoes (with winds up to about 300 mph) can destroy all but the best-built man-made structures.

As a child, we were usually permitted to play outside in a thunderstorm until we heard the rumbling sound of thunder.  Then, with the threat of lightning close by, we were ushered inside by adults.  We used to say that if you count how many seconds there were between the rumble of thunder and the flash of lightning (counting with “Mississippis” of course), you could tell how many miles away the storm was.  If there were only a few seconds between thunder and lightning, it was time to get inside.  It turns out that our game was partially true.  You should count the seconds between the sound and the light and you should count using “One-Mississippi”, “Two-Mississippi”, etc. However, you should take this number and divide it by five.  For every 5 seconds counted, the storm is 1 mile away.

What else should we know about lightning?

·         Lying flat increases your chance of being affected by potentially deadly ground current.  If you are caught outside in a thunderstorm, do NOT lay flat on the ground.  Keep moving toward a safe shelter.

·         Height, pointy shape, and isolation are the dominant factors controlling where a lightning bolt will strike.  The presence of metal makes absolutely no difference on where lightning strikes.  Mountains are made of stone but get struck by lightning many times a year.  When lightning threatens, take proper protective action by seeking a safe shelter.  While metal does not attract lightning, it does conduct it so stay away from metal fences, railings, bleachers, etc.

·         Many lightning casualties occur because people do not seek shelter soon enough.  If you consider my example above about playing outside, we never should have waited to count the seconds until the lightning flashed.  Rather, we should have run for shelter at the first sound of thunder.

·         Most cars are safe from lightning, but it is the metal roof and metal sides that protect you, NOT the rubber tires.  Remember, convertibles, motorcycles, bicycles, open-shelled outdoor recreational vehicles and cars with fiberglass shells offer no protection from lightning.  When lightning strikes a vehicle, it goes through the metal frame into the ground. Don’t lean on doors during a thunderstorm.

·         The human body does not store electricity.  It is perfectly safe to touch a lightning victim to give them first aid.  This is the most chilling of lightning myths.  Imagine if someone died because people were afraid to give CPR!

For more tips on Lightning Safety or safety from some of the other hazardous events produced by thunderstorms.

Home Fires during the Holidays, Be Safe 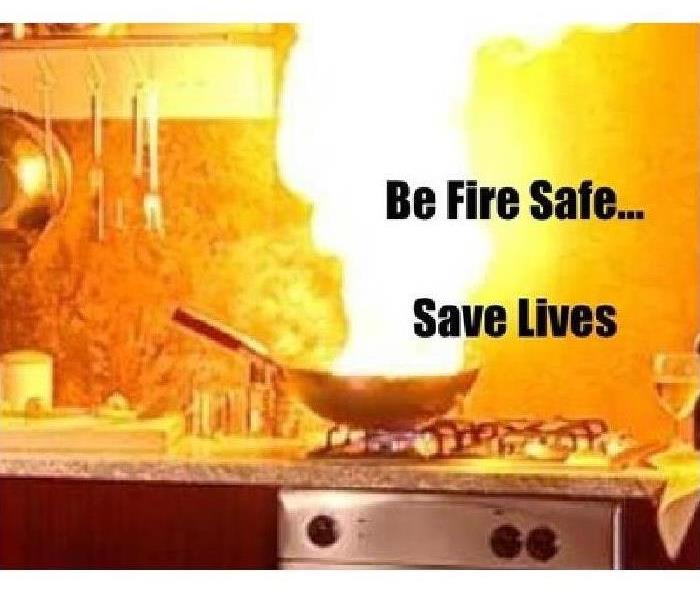 Avoid being one of many holiday fires, Be safe and have a great Holiday season

With the hoildays fast approaching, it is crucial that we use caution while preparing our holiday feasts and have a preparedness plan for cooking fires. Cooking is a great way to bring family and friends together but is the number one cause of home fires and injuries. Did you know that during 2009 – 2013 that U.S. Fire Departments handled an average of 162,400 home fires involving cooking equipment per year and these fires caused an annual average of 430 civilian deaths, 5,400 civilian injuries and $1.1 billion in direct property damage?

Cooking fires are the leading cause of home fires and home fire injuries in the United States.  In fact, the United States Fire Administration (USFA) states that there are nearly 4,300 fires will happen around the hoilday.  That’s more than double the daily average for residential fires.  The leading cause of holiday fires is food that is left unattended while cooking, which is why SERVPRO of Woodbury/Deptford asks for you to be aware while entertaining!

Here are some interesting statistics regarding Cooking Fires:

If you are aware of how to stay safe AND what to do in case you experience a cooking disaster, you should be able to enjoy this time with your family and friends. If all else fails, call SERVPRO of Woodbury/Deptford ! We have the equipment, expertise and experience to help make the disaster "Like it never even happened." Have a Very safe and happy hoildays!